Precious found on 5th January 1871. Disovered in Catto's paddock at ta depth of 12 feet. Named after 'Precious C Williams' who first owned the land the nugget was discovered on. Picture of model of the Preciouse at the Powerhouse Museum http://www.powerhousemuseum.com/collection/database/?irn=133

The Needful found on May 10th 1871. Discovered in Catto's paddock, 12 feet below surface. National Library of Australia picture http://nla.gov.au/nla.pic-vn4654768

The Crescent found on 2nd April 1872. Discovered 2 feet below the surface. Picture of model of the Cresent nugget at the Powerhouse Museum http://www.powerhousemuseum.com/collection/database/?irn=364353

On November nth 1970, at Mclntyre diggings, only a few inches from the surface, weighing 452 oz

Rheola is part of the golden triangle

1894, Mr William Gunn found a 16lb gold nugget in 'Uncle Tom's Gully'. Sold on the 26th of July to the Bank of New South Wales for the price of £4 2s per ounce. Mr Gunn had been prospecting in the area for 24 years. 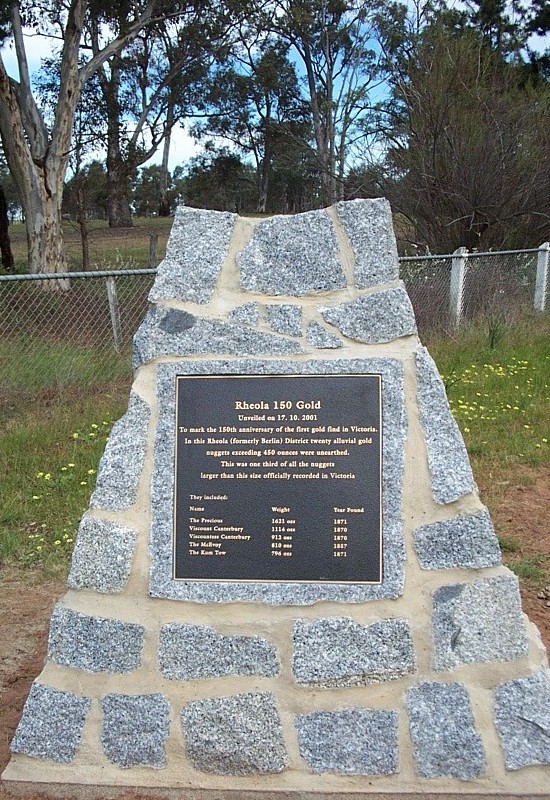 To mark the 150th anniversary of the first gold find in Victoria.

This was one third of all the nuggets

larger then this size officially recorded in Victoria

Historial information, facts, notes and dates for the rheola.com website has come from the book "History of Rheola" complied by Ronald Leslie Carless, published by Back To Rheola Committee