The first house to be built in Rheola, is believed to have been W. Tyler's "Halfway House", which was erected on what was known as Tyler's Flat, near the present Rheola Hall.

The building was so named because it was approximately half way between Dunolly and Inglewood and was a changing stage for Cobb and Co. coaches.

This building existed before the gold rush in 1869. reference to Jan 1962 (Races)

On the 15th inst, a post office (to be a sub-office to Kingower) will be established at Berlin, under the charge of Mr H. J. Williams.Mails will close at this office dally (Sundays excepted), at 6.30 p.m.Return mails will be due at Melbourne daily (Sundays excepted), at 11.18 p.m. (Signed) H, P. BANCE.General Post Office, Melbourne,February 8, 1869.

Telephone facilities were fisrt provided at Rheola in 1922. Info from "History of Rheola" by Ronald Leslie Carless

The police reserve was situated near the Kangderaar Creek, west of the Rheola Cemetery.

Info from "History of Rheola" by Ronald Leslie Carless

1916, 14th March. Constable Hickey, who for some considerable time has been stationed at Rheola, has been transferred to Malmsbury. It is understood the Rheola police station will be closed.

Mrs Jonathan Leach had a private school in Rheola before the state school opened. She was a teacher in Scotland before coming to Rheola. Her husband was a policeman. Info from William Leach letter (see below)

Wooden building with iron roof contain two rooms, (30feet by 18feet and 18feet by 18feet). Entrances at each end.

With the change of the town name in1876 the school also named changed from 'Berlin' to 'Rheola'.

In 1908 a gold nugget was found while block holes were being dug for a shelter shed.

In 1946 the school was granted permessiont to establish a Soldiers Memorial Plantation on the roadside opposite the school. Plantation was extened in 1949 and 1950.

School and School House is now part of private residents. 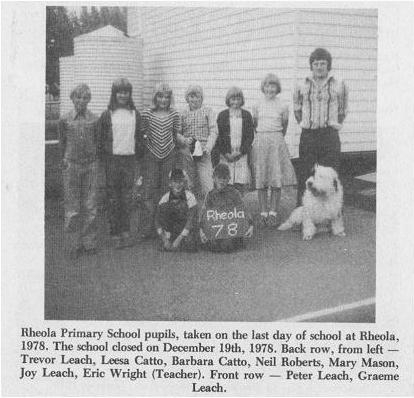 Letter from William Leach in June of 1969 to his niece Mary-Anne Soulsby with his knowledge about Rheola State School. View HERE (pdf file)

Some information from "History of Rheola" by Ronald Leslie Carless

For many year ex-Army tanks sat beside the road in in Rheola and were a draw card for many passing travellers. There were 3 tanks in total. One located in the paddock and two on the roadside beside the Dunolly-Wedderburn Road near the former Catholic Church and the site of Greaves Butcher Shop.(leading North-West out of Rheola).

The Robertson’s brothers worked together after war WW2 and had purchased the decommissioned army tanks, converted them into bulldozers sometime in the 1950’s, this included building the bulldozer blades. The dozers were used for clearing the land and building dams, at the time they were much faster and cheaper than using horses. Tank model that the Robertson used were the Matilda, Stuart and the Grant.

The tanks were removed around 1990, Mick Reeves helped remove some of them from the site. Some of the tanks were moved to Murrayville to Peter Peers tank collection. 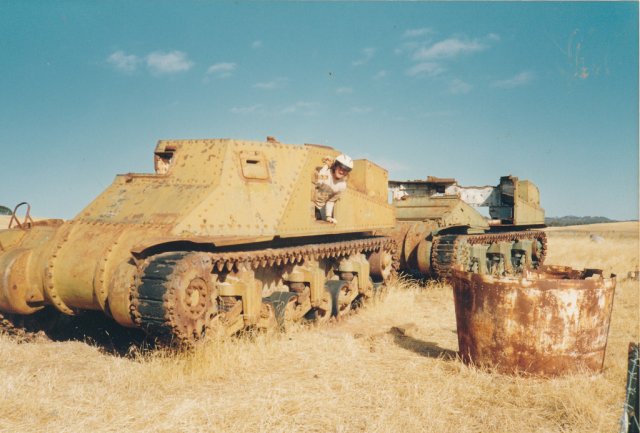 Picture is from Ray Peace (with permission) during one of his bicycle riding visits in 1985.

Butchers building:  The last known butcher in Rheola was run by the Greaves family.  In 2014 there is no longer any remnants of the building.

“Culvert near Rheola is the most sophisticated, decorative and intact example of its type known to the National Trust”
With granite abutments and wing walls, timber deck. Believed to have been built during the gold rush era of 1870s for mail-coach route linking Inglewood with Rheola.
More information at Heritage Council of Victoria, Victorian Heritage Database: http://vhd.heritagecouncil.vic.gov.au/places/68781

Opening of 9 feet high and five feet wide. Granite used in its construction was obtained from a small quarry one mile east of Rheola.

The bridge near Rheola Hall also had granite foundations but when the bridge was widened the stone sides were removed.

Current fire fighting trucks and sheds are located at the southern entrance to the Rheola township. 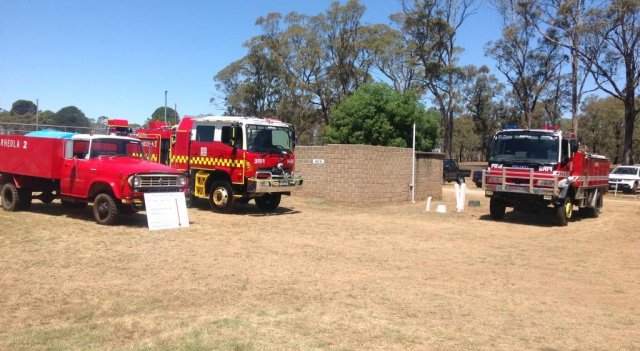 2015 Rheola Fire Brigade, 75th Anniversary and the displaying of the newest truck.

Tennis has been an active sport in Rheola for at least 60 years. About 1904, the first court was built in Chapel Gully. Some of the original members of the first tennis club were Mr. B. Ambrose, Mr. E. Coates, Constable Kennedy, Mr. H. Soulsby, Mrs W. Hargreaves, Misses M. McPherson, L. Kennedy and Dora Hargreaves.

Mr. Arthur Hargreaves, a son of Mrs W. Hargreaves, later umpired Davis Cup matches at Kooyong.
On October 1, 1921 the Rheola Public Hall Committee granted the tennis club permission to build tennis courts in the hall grounds.
About 1926, when Rheola had an active team, the club joined the Tarnagulla District Tennis Association.
On September 30, 1933 the tennis club again sought permission to erect a tennis court on the hall site. Accurate reports of the club’s progress date back to 1933, when Mr. A. Morse and Mr. J. Roberts were elected President and Secretary, respectively. During 1937, the club had to pay 10/- for the use of the hall supper room and crockery.
The war caused the club to disband, but it was reformed in 1945, when Mr. H. Poynton was elected President and Mr. J. E. Roberts, Secretary. Later Mr. G. Catto took over the secretaryship.
Four premierships were won in the Arnold Tennis Association. In 1952, two teams were formed, play taking place in Inglewood, as well as the Arnold Association. More premiership trophies and pennants were added to the club honours in the 1950’s.
As the Inglewood Association changed all it play to grass courts, the existing courts near the Rheola Hall are now used for practice by junior members and the Easter Carnival Tournament.
During November, 1960, the Tennis Club was given a ten year lease of the two courts located on the hall property.

Tennis Courts next to the Rheola Hall (Photo 2014)

Mervyn Mason was both a player and captain of the Rheola Tennis Club for many years.

First records of Rheola Cricket Club was in 1930.

1931 permission was give to build a concrete pitch by the Trustees of the Recreation Reserve.

1939 club was disbanded.  Cricket materials was left in the care of Mr William Hargreaves

1870 cricket match was played between Berlin and Dunolly

In 1939, the league in which Rheola was successful was formed.

During war years the football league was disbanded. Loddon Valley League was reformed in 1944

Serveral Social balls were held and in 1947 a christmas ball was held. 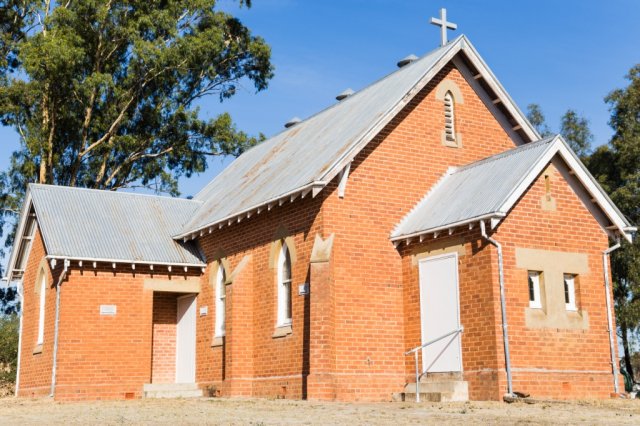 Rev William Hall built seven churches in the goldfields regions: at Glenalbyn (1861), St Arnaud (1864), Moliagul (1865), Wedderburn (1866), Bealiba (1869), Rheola (1870) and at Kingower (1871). All of these were simple structures designed by Hall, and are of no great architectural significance. They all have local historical significance as the first Anglican churches in the towns in which they were built, and for their association with the Rev William Hall. (Victorian Heritage Register, FILE NO: 12/004281) 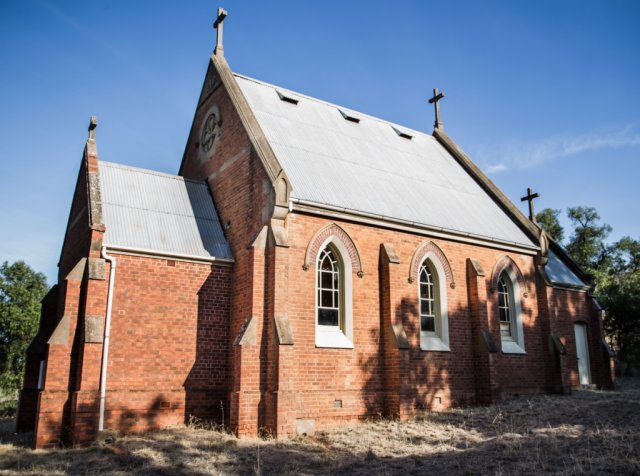 Roman Catholic Church
Roman Catholic Church of Sacred Heart was opened on Sunday October 6th 1901.
Regular fortnighly Masses ceased in 1956. In 1969 the altar and seats were transferred to St. Mary's Church, in Inglewood.
Info from "History of Rheola" by Ronald Leslie Carless

Naming History
Alexander Celland, discover of the Berlin Goldfield, was born in Scotland. Possibly wanted the area where he found the gold to be called Bervie (his birthplace in Scotland) or Inverbervie (after a small seaport on the coast of Kincardineshire)

Many of the inconsistancy are blamed on mining registrar error and corruptions of the name.
In 1876 the local parliamentary representative Mr B. J. Davies, Member of Avoca, took the suggested name of; Rheola; from Mr W. Johns (during a meeting in Inglewood). The name Rheola has Welsh origins.

Located to the West of the Rheola township

Many of the historical information, facts, notes and dates for the  rheola .com website has come from the book "History of Rheola" complied by Ronald Leslie Carless,  published by Back To Rheola Committee